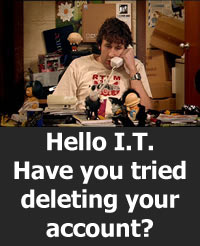 So, I have been using twitter for over a year now and I was getting all stressed out about Twitter filtering me from search (where your tweets cannot be found by others).

This is actually something that started about 6 months ago but #twitter @support? is non-existent. And after multiple attempts at following their help and repeated attempts to get help from Twitter I realized this was futile. Honestly, I think their support team consists of a 41 year old living in his mom's basement, that gets annoyed whenever an e-mail comes in (I'm thinking of Roy from IT Crowd... some of you will understand).

Anyways, this got me thinking why I was on Twitter in the first place. For those of you that don't use it or are just new to Twitter it is like text messaging where anyone with an account can read it. I did a full review of all of the websites I manage, some of them have significant traffic for sites that target small communities. Not only were the results un-impressive, they were nearly non-existent in most cases. Sure there was the odd interaction with a potential client, but in many of those cases they were aware of the site already and just happen to choose that method of contacting us.

Tweets have their use, but most of the content is superficial or 300 messages citing the same news headline. I find that people often do not respond when you mention them, and conversations are difficult to have because of the short/broken sentences and long delays. Twitter is happy to let our competitors spam their generic country wide non-sense but blocked us because were a small local business.

I agree. Twitter is useless garbage. I recently had someone comment on a tweet of mine, and I can’t even read it. It’s blocked from my view for whatever reason, and I just don’t care anymore. I’m done with it.