I have done a good amount of research on the best browser that's fast, includes ad blockers, and has a built-in VPN option. I strongly recommend you Download Brave Browser (Free).and give it a try.

The best alternative to Google Chrome

Google has recently made some updates to Google Chrome that stopped image and file uploading to Wordpress, Drupal, and may other websites. Users either get an AJAX error or nothing happens at all. While there are workarounds that web developers can implement, it's crazy that Google thinks they can simply "break" their browser without notifying or warning users of the issue.

The Brave Browser has a fantastic default extension that blocks advertising, website tracking, and those annoying repetitive ads that follow you around the web after you do a search for something. It's easy to see what the browser blocked and unblock it where necessary.

When you use Brave you can choose to donate a few pennies to websites you use and have full control of who you support, this can be awesome for local websites in your community that could be motivated to keep going if you automatically make a tiny donation to their online community.

The creator of Brave Browser was canceled and stepped down because it was revealed that he was a social conservative and had supported Prop 8 (despite his apology). Regardless of where you stand on this politically, I think it has become obvious that destroying people's lives for holding certain views or opinions is insane.

It's Not Owned by one of the "Tech Giants"

If you are tired of Google (Chrome), Microsoft (Edge, Explorer), Apple (Safari) owning everything and tracking all of your online traffic then Brave is a small startup looking for you to give them a chance.

Perhaps the most surprising part of Brave is that it has a built-in option to open a TOR tab, which has the ability to access the Dark Web (sometimes known as the Deep Web) and sites that would normally be hidden or blocked in certain countries. This is a critical part of the Internet as Governments in various parts of the world have started looking to censor, charge fees, or block websites from certain countries. 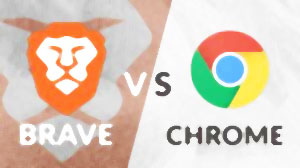